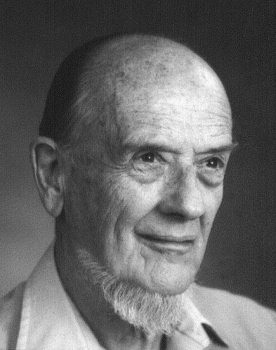 Paul Beidler (10/20/1906 – 09/11/1998) studied at the School of Architecture at the University of Pennsylvania (B.Arch. 1930) and on a Taliesin Fellowship with Frank Lloyd Wright. From 1930-34, he was staff architect for the archaeological expeditions of the University of Pennsylvania in Egypt, Iraq, and Italy. During this time Beidler began a spiritual quest. He was influenced by Sufi dervishes in Egypt, Iraq, and Persia, and lived among Yesidi priests in Kurdistan, where he was admitted to the hidden mysteries of Sheikh Adi. Shortly afterwards, he met Gurdjieff, who became responsible for the direction of Beidler’s life.

Impelled by the force that Gurdjieff and his predecessors represented, Beidler set out on a series of four distinct careers, abandoning each one after he had reached its plateau of accomplishment. These careers were external patterns within which the precepts of Gurdjieff were applied.

In 1949 Beidler associated himself with the newly formed Gurdjieff Foundation. Six years later, as a member of the U.S. Foreign Service, he left for Asia to prepare himself for his eventual role. In 1973, after a quarter century of exploration in selected regions of Asia, he returned to undertake The Search at Northeon Forest. He had confirmed that “work on himself” was best sought under the disruptive and trying conditions of everyday life, but that the deterrent influences that normally prevail under these conditions are powerful enough to overwhelm even the most ardent searchers unless their efforts are reinforced by energies generated at a focal point of higher striving. Northeon Forest is becoming that focal point.

Beidler’s approach encourages personal verification by emphasizing that seekers must individually search, labor, and suffer. Practices and exercises are created by the seekers of Northeon Forest around programs, written by Beidler, as well as their own discoveries in the search. Seminars, sacred dances, meditation, and rhythmic movements with music complement the work at Northeon forest.

In 1973 when Beidler returned to the United States, he moved to his tree farm Northeon to undertake The Search at Northeon Forest, a personal journey to bring himself, along with other seekers, “into harmony with the true reason for existence.”

1.   “Holy-Affirming + Holy-Denying = Holy-Reconciling” > “Transubstantiate in me for my Being.”
This is a prayer given to us. In it I have found what I call the Holy Equation which provides us with a basic pattern for most of our work. Holy Denying equals our inherited mechanical “myself” manifested by our habits, traits, thoughts, feelings and actions in sleep. Holy Affirming is our conscious effort to accept, endure and to meet with objectivity all our Holy Denyings. Holy Reconciling is the resultant of them both leading automatically to a Transubstantiation. By self-observation we learn to recognize accurately our Holy Denyings to which we then eventually apply our Holy Affirming.» /

2. «We are “harmonized” when our three centers are coordinated in unison rather than “in chaos” when each center acts independantly of the others (our usual, normal, mechanical condition). We approach harmony when the three centers are each relaxed because then they are comfortably related to one another. In meditation we try to be as physically relaxed or loose as possible, to which is added a neutral emotional condition, to which is added a quiet mind (no thought). A goal is to do everything with the three centers harmoniously related.»

” Consccious Labor and Intentional Suffering; the two pillars of the Work.”/

” Man has been given a new organ: being.”

“A teacher’s task is not to convey knowledge, but to set up situations  in which students cannot help but learn something. Teachers exist  not to tell students what they themselves know, but to find ways to share with students the pure fun of discovery; the sense that  learning is only slightly less exciting than falling in love. No teacher can claim anything like success in any of this; a few of us, however, can be proud that we have not failed with every student.”