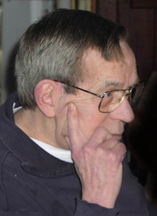 Dr. Keith Buzzell was born in 1932, in Boston, Massachusetts. He studied music at Bowdoin College and Boston University, and received his medical doctorate in 1960 at the Philadelphia College of Osteopathic Medicine. For the past 35 years, he has been a rural family physician in Fryeburg, Maine, a staff member of Bridgton Hospital and currently holds the position of medical director at the Fryeburg Health Care Center. Dr. Buzzell has also served as a professor of osteopathic medicine, a hospital medical director and founder of a rural hospice program.

Keith A. Buzzell and his wife Marlena, met Irmis Popoff, a student of Gurdjieff and Ouspensky and founder of the Pinnacle Group in Sea Cliff, Long Island, New York. From 1971 until the mid-1980’s they formed work groups under Irmis Popoff’s supervision. In 1988 Dr. Buzzell met Annie Lou Staveley, founder of the Two Rivers Farm in Oregon and maintained a Work relationship with her up to her death. Dr. Buzzell lives and continues group Work in Bridgton, Maine.

Written work by Keith A. Buzzell

The Children of Cyclops: The Influences of Television Watching on the
Developing Human Brain. Fair Oaks, Association of Waldorf Schools
of North America, 1998

Presentations at All and Everything International Humanities Conference 1995