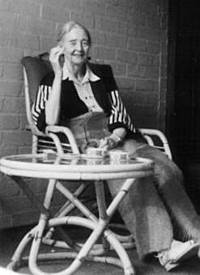 Helen Adie, born February 25, 1909, died October 19, 1996, was the wife of George Adie (1901-1989), both of them being pupils of Ouspensky and Gurdjieff. Born Helen Craddock Perkin, she was the favourite pupil of British composer John Ireland. Originally famous as a concert pianist, Helen Adie acquired fame for her compositions for brass bands. She married George Adie in 1930, after which they made the acquaintance of P.D. Ouspensky, becoming his pupils. After World War II, Helen Adie and her husband occasionally visited Gurdjieff in Paris, and after Ouspensky’s death in 1947, they became pupils of Gurdjieff. After his death, they moved to London where George Adie became a member of the council of the London group, established under the jurisdiction of the Institut Gurdjieff in Paris under Jeanne de Salzmann. It is a documented fact that Jeanne de Salzmann suggested Mrs. Adie to take lessons with Thomas de Hartmann, which she did, but she asked not to disclose the fact to Gurdjieff. In 1965 they moved to Sydney, Australia, where they founded the Gurdjieff Society of Newport which they led until their deaths. Helen Adie taught the movements for 22 years as part of the society’s activities. During Helen Adie’s studies with Gurdjieff, he asked her to write the music for some of his movements. A compact disc of Helen Adie performing Gurdjieff’s music (Music of the Search) has been released. Some of the music composed by her for the movements has been published in a limited run and is available in a privately circulated edition. Carl Ginsburg in his Medicine Stories (Center Press, Santa Fe, 1991, “The Daphne Blossom”) depicted George and Helen Adie as the fictional characters Mr. and Mrs. Todd-Ashby.