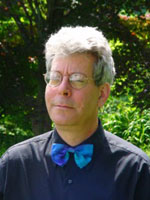 Elan Sicroff trained as a classical pianist at the Juilliard School and the Oberlin Conservatory. From 1973-5 he attended the International Academy for Continuous Education in Sherborne, Gloucestershire, England, as a student and later as music director. The program was run by J. G. Bennett, a leading exponent of Gurdjieff’s teaching. Mr. Bennett introduced Elan to Mme. De Hartmann, wife of the composer. From 1975 until 1979 Elan studied with her and performed de Hartmann’s works. In 1982 he made a tour of the U.S., including performances in Chicago, Los Angeles, New York and Boston. Since then he has given numerous recitals of this music at concert halls and Universities in the U.S., Canada, and Europe.