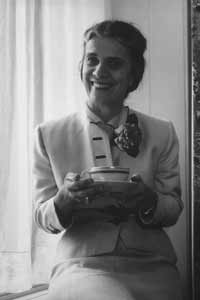 Olgivanna Lloyd Wright (1898 – 1985) was the third and final wife of Frank Lloyd Wright and had significant influence in his life and work, due in part to her extensive Theosophical associations. She was a Montenegrin dancer. While her “language, cultural background and upbringing were almost exotically alien to his own,” she was critical in introducing Wright to Greek-Armenian mystic G. I. Gurdjieff, a man whom he alternately despised and admired.

She was born as Olga (Olgivanna) Ivanovna Lazovich in Montenegro on 27 December 1898 to Ivan Lazovich and Militza Miljanova. She was the granddaughter of a famous Montenegrin writer, tribe leader of Kuči, Montenegrin duke, and hero Marko Miljanov. A long-time pupil of and devotee to G. I. Gurdjieff (even after her involvement with Wright), she was also a nurse to Katherine Mansfield on her deathbed at G. I. Gurdjieff’s Institute for the Harmonious Development of Man at the Prieuré des Basses Loges on 9 January 1923. She had begun her career with Gurdjieff as a student of sacred dance, which she later mastered.

She was married first to Vlademar Hinzenberg, a Russian architect.

Wright and Olgivanna married August 1928 in La Jolla, and honeymooned in  Phoenix, Arizona. According to architectural writer Walt Lockley, “The Foundation and the Fellowship would not exist in any form if Wright hadn’t gone to the opera with a friend one Sunday afternoon in 1924 Chicago and sat near to the dark-haired Montenegrin dancer.”

Olgivanna continued to run Wright’s Taliesin Fellowship long after his death, from 9 April 1959 until her own death in Scottsdale, Arizona in 1985. The last quarter-century of Wright’s life—his Arizona years with Olgivanna, from 1932 to 1959—were arguably his most productive, representing “more than half of [Wright’s] building” and including the authorship of his autobiography.

on the web-site  Tesla Memorial Society

on the web-site Katherine Mansfield