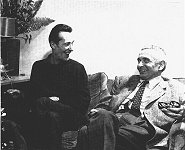 Philippe Lavastine, an expert in Sanskrit, lived in India and wrote about it in his book The Best and the Worst of India. He also recounted in his memoirs incidents that shed light on some of Rene Daumal’s character traits.

In 1931 Daumal urged Philippe to accompany him to a lecture given by Alexandre de Salzmann. After the lecture, de Salzmann discussed Gurdjieff ideas of the cosmos with them until nine o’clock the following morning. Immediately Lavastine was drawn into Gurdjieff Work and they became close friends. For some time, Jeanne de Salzmann had been meeting with a group at the home of Philippe Lavastine. The group consisted, among others, of Henri and Henriette Tracol, Marthe de Gaigneron, Pauline de Dampier, and Bernard Lemaître. That October, Mme de Salzmann presented her group to Gurdjieff and meetings began thereafter.: Philippe Lavastine took part in a French language documentary film Georges Gurdjieff produced by Jean-Claude Lubtchansky which was broadcasted on September 22, 1978 on TFI (Institute National de l’Audiovisuel).