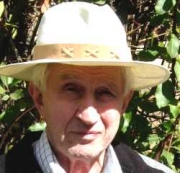 John Wilkinson has dedicated his life to investigating many of the world’s paths in his effort to uncover a way that works in this time and place. He uses a variety of activities with his students, including talks, groupwork, exercises and meditation.

John was a pupil for many years of J G Bennett, mathematician and philosopher. He specialised in learning and teaching the Gurdjieff Movements and was on the staff of the College for Continuous Education. He is also a fully trained Martial Arts teacher in Aikido and Judo and a head schoolteacher. After Mr Bennett’s death he studied with other enlightened teachers under whose guidance he researched widely in India and the Middle East. Subsequently, he began to find his own particular Path, which he now shares with those who listen.

“What I am trying to encourage you to do is to take an interest in yourself, in your makeup, what you are and what your capabilities are. All real investigation is investigation of yourself. When I get into this independent thinking I am starting to investigate the infinite world that I am because truly there are infinite worlds within us, from the highest to the lowest.”

Dilemma in the Fourth Way

Being Present and Other Articles