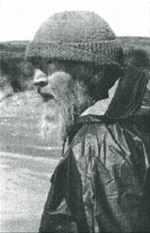 Robert S. de Ropp  – On a mountainside in Northen California there lived, until his death in the fall of 1987, a man who had something urgent to say to every person pursuing the inner-transformational path. Robert S. de Roop, born on February 1, 1913, was a household name among the “counterculture” of the sixties.

His academic training was in bio-chemistry. His professional life included a stay at the Rockefeller Institute as a visiting investigator. His research was centered on cancer, mental illness, and drugs that affect behavior.

His avocational interests grew from his being strongly influenced by P. D. Ouspensky whom he met in 1936. He went regularly to Lyne Place for work weekends from 1936 to 1945 and was particularly attached to Madame Ouspensky. By 1945 the Oupenskys were in the United States, and de Ropp joined them there but became disillusioned about the work. His professional life included a stay at the Rockefeller Institute as a visiting investigator. His research was centered on cancer,mental illness, and drugs that affect behavior. He met G. I. Gurdjieff during his final visit to New York. De Ropp became an independent teacher and set up a community in Santa Rosa California around 1967 [ Sophia Wellbeloved “Gurdjieff: The Key Concepts” Routledge (2003)  ]

Among his most influential books concerning spiritual development are: “The Master Game” and “Warrior’s Way: The Challenging Life Games”. The first of these stands as his report on what he has learned from his teachers and from the writings of similar figures as well as more main-stream psychologists, psychiatrists, and researchers into fields such as religion and the spiritual life. The second was written near the end of his life and in a very personal way gives his evaluation of the characters and contributions of Gurdjieff, Ouspensky, Madame Ouspensky, and other major figures in the field of teaching those engaged in spiritual quests. He spares neither the false gurus nor the merely pompous, while expressing genuine gratitude for those whose efforts he believes have enriched human life.

De Ropp died in his 70s while ocean-kayaking.