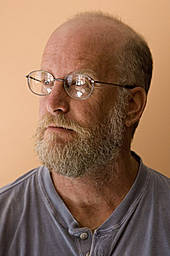 Parents: Actors – childhood circumstances always uncertain and sometimes hazardous; early on became interested in the meaning of life – questions why am I here?  Instances of self-remembering.

Once as a baby, my mother took my brother to a movie. She rarely left me alone with my father due to his drinking. At the movie, she had a premonition, and ran home. I was lieing on my back with head down between two beds – my father was passed-out. I was not breathing and had turned blue – my mother was able to resuscitate me. But there were long term effects due to prolonged deprivation of oxygen to brain. Little to no sensation of physical pain until about the age of 10, very poor balance, lack of co-ordination, lack of connection to outer world and other anomalies. This stimulated an interest in overcoming these deficiencies as well as a pervasive awareness of being a stranger in a strange land.

Met many different people- actors, gypsies, con artists, Indians, bums and alcoholics. Quickly developed an instinct for self-preservation.  In my teens I began Karate but soon switched to Tai Chi Chuan, studying with Master Marshall Ho’o and later Master Tung Kai Ying. This was also a time spent immersed in the so-called hippie culture of the 60’s.

At 19, I also began to study Taoist Medicine with Master Ju Kim Shek; along with meditation and a continued interest in philosophy and shamanism. Traveled to Mexico to meet with brujos and curanderos. See essay titled Facts.

At the same age after several years of searching, I found my first Gurdjieff group leader, Jim Flynn, one of the founders of the Gurdjieff Foundation of Los Angeles under Lord John Pentland. I met Lord Pentland at 20; in him I found the first indisputable evidence of a man who lived and understood life at a higher level of being.  Later, I met others including Paul Reynard and especially Dr. Michel de Salzmann whose degree of harmonious development was living and palpable proof of the value of Gurdjieff’s teachings. Paul gave me permission to begin Foundation groups, Michel de Salzmann, the leader of the Work worldwide approved this and added that I would attract more people to the Work and start new centers and gave me specific instructions concerning this.

Returning to 1970, A small group of college friends began to explore different areas of mutual interest; one was interested in Ischwaller de Lebicz, another Krishnamurti, Chogyam Trungpa – the Phi ratio, several were friends of Carlos Castenada and so on. The more I explored, the more I became convinced that Gurdjieff’s teachings were the most salient. It re-enforced the strange conviction I had felt when I first began reading In Search at the age of 16. The certainty that Gurdjieff was the teacher of this age and the one who I would follow the rest of my life.

In 1986, I was the founding director of Turnaround, a skidrow social services center that specialized in the treatment and rehabilitation of alcoholics and drug addicts, many coming directly off the streets or from jail. We began a pilot project to co-ordinate treatment for a better transition within the County jail to Turnaround. Following this I co-owned and worked in a remodeling company, was a consultant to  business, particularly non-profits in strategic planning, grant and technical writing, stress and performance improvement, hand-off and mentoring. Led seminars and taught Taoist and other related arts since 1972, however – teachings and practices are not mixed and the central focus of my life has always been and remains the Gurdjieff’s teachings.

In 1999 moved to Portland Oregon and founded, the Oregon/Portland Gurdjieff Foundations.

In 2005, moved outside a small town in the high Sonoran Desert of Arizona and built a house.

In that same year came to Russia and began an experimental Gurdjieff Group, now called, the Russian Center for Gurdjieff Studies. The only Gurdjieff – 4th Way organization in Russia in direct lineage from G.I.Gurdjieff.

(This material was provided by Alan Francis)