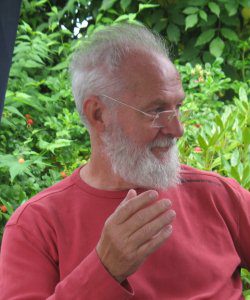 André Bajot was born on March 13th, 1945 in Liege (Belgium). He was raised by his grandmother, a spiritual healer who became his first teacher. While working as a postman and being involved in football, Andre also felt himself inclined towards mysticism. He absorbed numerous philosophical and religious books pertaining to different cultures and practiced meditation. At the age of 28 he found his Master, a Buddhist, who guided him in the practice of the Fourth Way for a number of years. Following his Master’s request André founded the Fourth Way Community, called “Socrates”, which is still active today.

His son became his second teacher. Being blind from birth and handicapped, he needed André’s attention for entire days and nights for 33 years.

André wrote two books on which he did not sign his name: “L’Appelé” (The Call) and “Vivre Présent au XXIème siècle” (Present Living in the XXI Century), both of which are already sold out.

In 2000 a program appeared on Belgian television, devoted to André Bajot. The European television show “Arte” is also planning a show with him in the future.

The non-profit association “Socrates” is focused on home life activities. It is a community that puts the Fourth Way teaching into practice and is guided by four essential principles: Awakening, Fraternity, Solidarity and Beauty. The number of residents varies from 4 to 12 people because of the difficult challenges of life in the community.

On the first Saturday of each month 10 – 20 people come from various places, as far away as from France, to join the meditation, reading of texts, chanting of mantras and performing the Movements.

For those people who are not engaged in outside professional functions each day is based on work at home, maintenance of the park and garden, and spiritual exercises.

Every Wednesday in one of the restaurants in the vicinity the association brings together about a hundred people who are suffering financial difficulties or who are simply lonely offering them meals and warm attention.

People who suffer from domestic violence could also find shelter and sympathy in the community.

(This material was provided by André Bajot)

The articles by André Bajot  on our web-site: