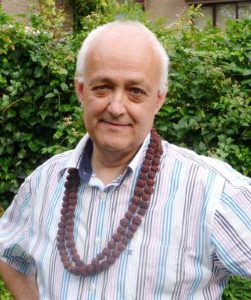 Paul van Oyen got acquainted with the philosophy of Ouspensky through his parents who had started an Ouspensky discussion group in The Hague and subsequently in Amsterdam as from 1938. His parents met Mr Ouspensky several times and he gave them his blessings for starting such a group in the Netherlands. When Mr Ouspensky had passed away in 1947 they kept in close contact with his successor Dr Francis Roles who had the unique opportunity of finally meeting a ‘conscious source’ of the Holy Tradition which Mr Ouspensky had been looking for during his lifetime.

Leon MacLaren was the founder and senior tutor of the School of Economic Science, London and worldwide. From then on, like the Study Society of Dr Roles, this School focused on the teaching of advaita vedânta. From then on many other Gurdjieff/Ouspensky groups in the world would become heavily interested and involved in the study of advaita vedânta, as one of the sources of the living Holy Tradition. In 1961 his mother started the School voor Filosofie in the Netherlands and Paul took over the leadership in 1989 until 1997.

In 1997 he decided to continue his personal path and became an author and lecturer. For earning a living he continued his business consultancy as a former banker (founder and CEO of London Amsterdam Merchant Bank). He has published many translations with commentaries on Christian and Vedânta literature. At present he is engaged in a translation and commentary on St John’s Gospel and also in a ‘Life of Jesus Christ’. Paul lives in Amsterdam (www.pvanoyen.nl)

The articles by Paul van Oyen on our web-site: